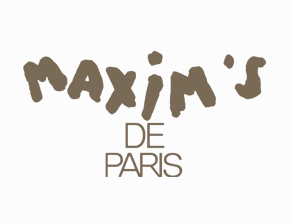 The legend of Maxim’s started back in 1893, in Paris, when a coffee waiter called Maxime Gaillard fulfilled his dream and opened his first bistro near the Place de la Concorde, at n°3 of Rue Royale. In order to greet the 1900 World’s Expo, the successor owner, Eugène Cornuché, turned Maxim’s into a masterpiece of “Art Nouveau”. A unique combination of styles and periods, the decor of Maxim’s restaurant is considered a historic building. Its wall seats, glass ceiling, mirrors, and its over hundred-year-old woodworks account for the splendors of the passed century and are part of the items that make the renowned restaurant of Rue Royale a genuine museum.
Artists, rich and powerful people have all been attracted by Maxim’s dining room in the heart of Paris. Among the great figures of 20th century elite rubbed shoulders at Maxim’s: Feydeau who wrote “The Girl From Maxim’s”, Sacha Guitry, Marcel Proust, Callas, John Travolta, Brigitte Bardot, Barbara Streisand, etc. Even the art master Salvador Dali enjoyed discussing about food art with the chief!
On a night of 1981, Pierre Cardin – one of the regular guests – was offered to buy out the restaurant. Exhilarated by the night spent in Maxim’s, Mr Cardin accepted and signed the deal the next day. With his inexorable passion and pioneer vision, Mr Cardin decided to promote Maxim’s exceptional heritage, and conquere the palates of the world with Maxim’s brand. Mr. Cardin confidently said: “These elegant outstanding products are filling with future breath.”
Passing through decades and history, Flagship of the French gastronomy, immutable symbol of a legendary lifestyle, Maxim’s forever stands among the mythical places where everybody dreams of being invited to taste the thousand and one flavours of an unequalled restaurant. With more than 800 different products, Maxim’s development purpose is to offer gourmets the multiple sensual delights of a brand that is always maintaining a genuine savoir-faire in the most subtle flavours, the most delicate atmospheres and the most flamboyant parties.